Small details of the use of chemiluminescent reagent acridinium ester

Acridinium ester series products are ultra-high sensitivity chemiluminescent substrate reagents developed by our company. Usually this series of products have many features that need to be paid attention to in the process of separate shipment and usage in the warehouse due to the characteristics of frequent delivery and small shipment.

Although the acridinium luminescent substrate is not a very common reagent, it is indeed a very popular item in the field of in vitro diagnostics. Taking acridinium ester (NSP-DMAE-NHS) as an example, this is a yellow powder, CAS No.: 194357-64-7, is an important direct chemiluminescent reagent, with high quantum yield and chemiluminescent efficiency Higher, usually five times or more than Lumino. In alkaline H2O2 solution, when the acridinium ester molecule is attacked by hydrogen peroxide ion, the substituent on the acridinium ring can form an unstable dioxygen with the 9th carbon on the acridinium ring and H2O2 (hydrogen peroxide) Ethane structure. This structure is decomposed into CO2 and N-methylacridone in the electronically excited state. When returning to the ground state, it emits photons and produces chemiluminescence. 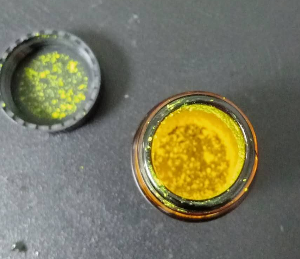 Acridinium esters are relatively expensive reagents, so the amount is not large when shipped or used, and it will inevitably cause loss when weighing, but some details can minimize the loss:

1. Take out the acridinium ester in stock before weighing. The advance time is adjusted according to the state of the acridinium ester in the stock bottle. Because it is stored frozen, the cap will be weighed immediately due to the temperature difference caused by the temperature difference, which makes the powder sticky and not sticky. Easy to weigh.

4. When in use, you can directly peel and weigh in the container that dissolves the acridinium ester, and then add anhydrous DMF to dissolve, to avoid weighing loss or loss in the transfer process (in the past, some customers thought that they received insufficient amount of acridinium ester Situation).

Desheng Technology has rich experience in the research and development and synthesis of chemiluminescent reagents, and its products are widely praised by major domestic chemiluminescent companies and platforms. In addition, Desheng's buffers are recommended for chemiluminescence detection. The company's buffers are complete, which can meet the needs of different buffer systems when acridinium ester labels proteins, antibodies or nucleic acids!