Luminol is luminescent ammonia, the full name of 3-aminophthaloyl hydrazide CAS521-31-3, is a yellow crystal or light yellow powder, can react with hydrogen peroxide or other oxidants under the catalysis of enzymes, and Light blue light. Therefore, it is widely used in blood detection and chemiluminescence immunodetection in criminal investigation.

In order to make everyone more intuitively understand Lumino's luminous performance, Desheng Company organized a fun experiment of Lumino-Lumino Luminous Fountain in the experiment building under the leadership of the technical department engineer Liu. The main principles of the experiment are as follows: 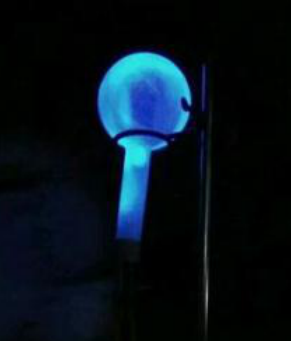 1. Add sodium hydroxide with concentrated ammonia water in the experiment to generate ammonia gas; due to ammonia gas and easily soluble in water, when a small amount of water is added to the next flask, the ammonia gas quickly dissolves, forming a solution in the negative pressure adsorption beaker, forming an ammonia fountain It does not provide an alkaline environment for luminol oxidation.

2. Taking into account the cost of the experiment, we replaced sodium perchlorate (the main component of 84 disinfectant or bleach) with direct reaction with hydrogen peroxide to generate active oxygen, which in turn oxidized luminol and emitted blue light.

Desheng has been engaged in the research and development of biochemical reagents for more than ten years. It has rich experience and mature technical services. This series of hot products include enzymatic chemiluminescence luminol, isoluminol and corresponding sodium salts, and more Highly sensitive direct chemiluminescent reagent acridinium ester series, sincerely invite domestic and foreign partners to visit!